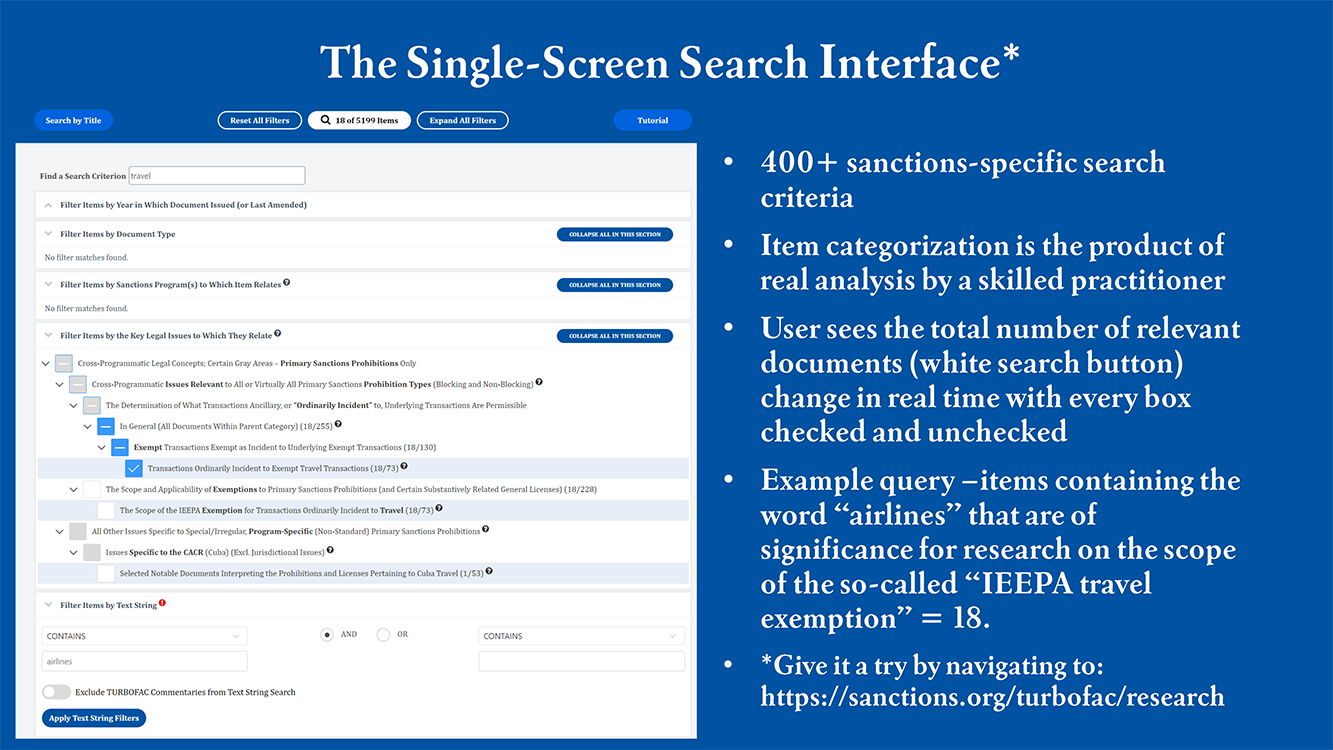 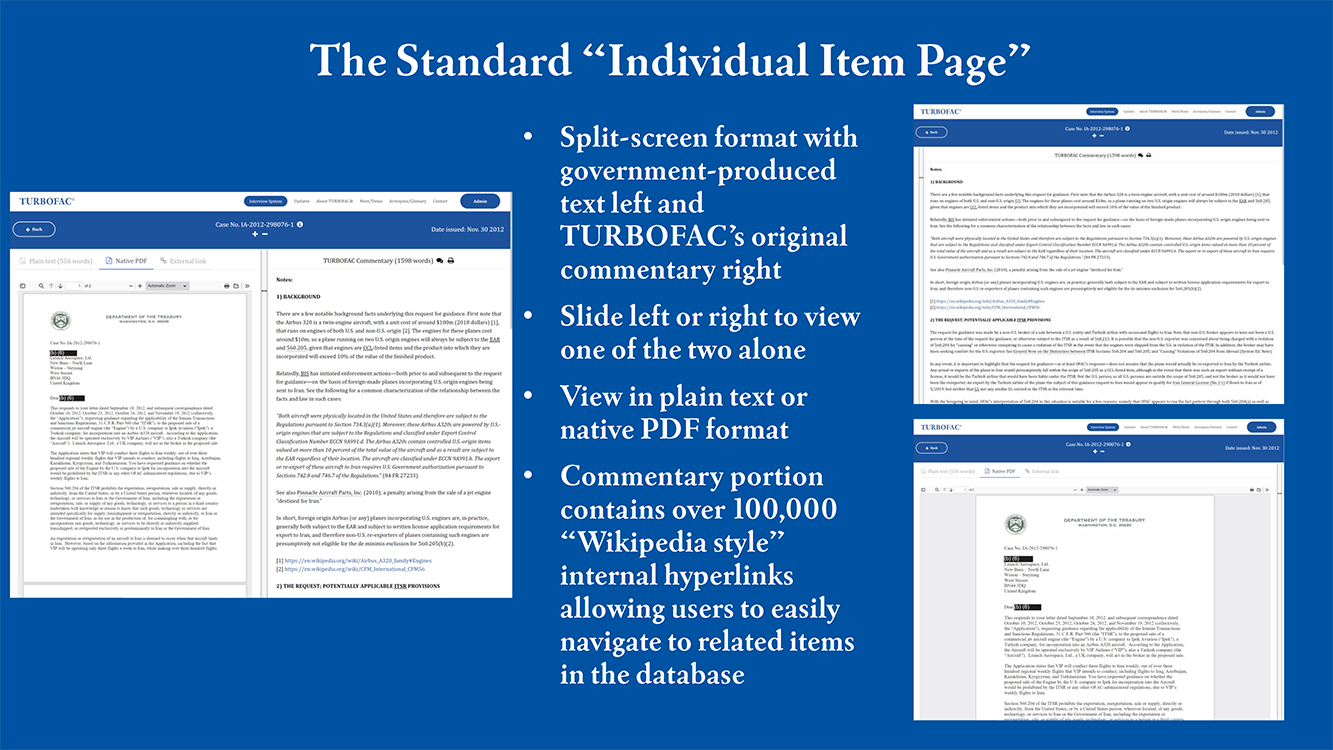 How often do you update the site? How will I know when an update has been made?

Items are generally added to the Research System and fully categorized for searchability within 24 hours of us being made aware of their existence. The Research System commentaries corresponding to the individual documents can take longer to prepare, depending on the complexity of the document added, but for items such as FAQs, enforcement actions and general licenses, we strive to have the commentaries complete within 24 hours of OFAC releasing the document.

Consult the “Updates” page for an accounting of what additions have and have not been made to the Research System. Subscribers to the Research System can also check for updates by selecting all items issued or last amended in the current year and sorting them from newest to oldest in the search results screen.

If you want email updates as additions to the Research System are made, you may sign up for such updates here.

I need a sanctions attorney. Can you help?

TURBOFAC is operated and maintained by personnel with experience as counsel at large law firms, but TURBOFAC is not engaged in the provision of legal advice or the formation of attorney-client relationships. For site users in need of a live sanctions compliance advisor, including legal counsel, we can draw on our experience in the industry and network of sanctions practitioners to recommend counsel that we would consider appropriate for a given set of issues. Sanctions compliance advisors can vary significantly in terms of price and skillset (e.g. some have a financial services focus, others have a software and technology focus). Recommendations should be directed to [email protected]

I disagree with something I found on the Research System (e.g. a statement that appears in a commentary, the tagging/categorization of a given document). Will you make amendments?

The individual document pages in the Research System contains an option to leave feedback. If you believe that we have gotten something wrong on the substance, we are happy to review the issue that you have spotted and let you know why we agree or disagree with your assessment. If we agree, we will amend accordingly and credit your contribution if you want to be credited.

How do you decide which documents go into the Research System?

As a general matter, we seek to balance the avoidance of clutter and duplicative materials with the goal of including within the Research System every document containing any statement attributable to OFAC that has a bearing on the scope and operation of sanctions laws administered by that agency. This includes primary legal source materials, i.e. legal authorities, along with formal and informal guidance issued by OFAC and other documents that serve as evidence for the way in which OFAC interprets the laws it administers.

For further information, you can review the “Document Type” search criteria found on the Research System interface. Alongside most of the individual search criteria are “tooltips” (question mark icons) that provide additional information concerning the scope of the documents included within each search criterion. For some document types, e.g. regulatory provisions and FAQs, we include all active items found on or linked to by OFAC on the OFAC website. For others, e.g. repealed regulatory provisions and guidance removed from OFAC’s website, we generally only include items that we consider to have residual value for the purposes of interpreting active sanctions laws. The determination as to what does and does not have residual interpretive value necessarily entails judgment calls on our part. For those document types for which we only include on the Research System a portion of the total that exist, we generally explain in the commentary associated with each document why we have deemed it worthy of inclusion in the Research System.

Why does the plain text portion of some of the OFAC/government-produced documents contain typos?

Many of the documents that we have reduced to plain text needed to be transferred from .pdf files. Of those, the native files are often poor-quality scans. We have taken every document available on the Research System database, run it through a top-of-the-line optical character recognition (OCR) software program, and from there reviewed it manually to make further corrections. However, this process leaves room for some errors at the margins. The reduction of documents to plain text is done primarily to facilitate text searchability. Before relying on any document, you should review the original version found in the native .pdf frame or external link to ensure that the plain text found on the Research System reflects what appears on the original file.

Many of the documents on the Research System are not publicly available, how did you get them?

The Research System contains hundreds of interpretive guidance letters, specific licenses and other communications issued by OFAC to private parties.

Virtually all of these documents were i) obtained via the federal Freedom of Information Act and certain state and local equivalents, ii) included in court dockets (e.g. buried in non-searchable exhibits to federal court filings available on PACER), or iii) provided to us directly or otherwise released into the public domain by the party (or a representative thereof) corresponding with OFAC. Some were found in the National Archives.

We have put considerable effort into obtaining every document of interpretive relevance that we have been able to locate. We do not believe that anything on the Research System is subject to any form of restriction on its dissemination, but if you have cause to disagree please contact [email protected] and identify the document at issue.

I have a document that should probably be on the Research System but isn’t there. Do you want it?

How do I know that the documents on the Research System are authentic?

For documents produced by OFAC, you may remove any doubt you might have as to the authenticity of a given document by calling the OFAC Licensing Division at 1-202-622-2480 (for specific licenses) and the OFAC Compliance Division at 1-202-622-2490 (for guidance letters and other items produced by OFAC). See OFAC FAQ # 468 addressing this same question.

Are the Research System search criteria automated in any way? Do you use artificial intelligence to categorize documents?

No. All classifications of items housed on the database are the product of manual review and classification by an expert in the field of U.S. sanctions law. Classifications are the product of judgment calls based in large part on qualitative criteria, especially where the classifications involve the identification of the treatment of important recurring legal issues. The only aspect of the Research System that is “automated” is the hyperlinking found in the commentary portion of the individual document pages. Internal links are automatically generated on the basis of certain text strings that are associated with items in the database. It is for that reason that the first instance of a given text string associated with a system document will appear as a hyperlink, but only the first instance.

What is the scope of the commentary/encyclopedia portion of the Research System?

The purpose of both the Research System is the assessment of the scope and operation of OFAC-administered sanctions laws, in particular as it relates to the threshold questions of whether a given set activities is licensed, exempt prohibited or otherwise sanctionable. Accordingly, the vast majority of our commentary is focused on questions relating to the scope of OFAC-administered prohibitions, exemptions, licenses and “secondary sanctions” provisions. For enforcement actions, we are particularly concerned with “connecting the dots” between the facts that OFAC discloses and the discrete prohibitions that a fined entity was considered to violate—OFAC does not always make its legal bases for finding violations explicit. We place particular emphasis on the identification of statements that are likely to have cross-programmatic applicability, e.g. a statement concerning the scope of the basic blocking prohibition in the Zimbabwean sanctions program that is likely to inform the scope of the analogous provision in other blocking based programs.

We generally avoid discussion of “policy”-related issues, unless those issues have a direct bearing on issues within the scope of our main focus, e.g. where the known “policy” underlying a given provision informs the interpretation of it that OFAC is most likely to take. We occasionally discuss notable aspects of OFAC’s interpretation of its “enforcement guidelines” (Appendix A to Part 501), but this too is de-emphasized because such discussions generally pertain to issues outside the scope threshold question of whether a given type of transaction is or is not prohibited.

Our pricing for individual documents and associated commentary is based on a few pricing tiers broadly applied on a document category basis. This is a crude methodology, and the price assigned to any given item should not be taken as an indication of the value that we place on that document. There will be good deals and bad deals. We provide the word count for the TURBOFAC commentary specifically for the purpose of providing potential purchasers of individual items some sense of how much of the content associated with a given item is paywalled.

The purpose of the option to purchase individual items is to allow users that are very interested in a small quantity of items to benefit from the Research System without paying for a full subscription. We encourage potential purchasers of single items to verify whether they can find the item for free before making their purchase, especially when there is not much commentary associated with a given item.

I want to compile enforcement statistics using the Research System interface, but the numbers of items associated with the search criteria are clearly too high. What’s wrong?

Is there a way to discern which of the documents on the Research System are currently on OFAC’s website, and which are not?

The descriptions provided alongside the discrete “Document Type” search criteria will generally make clear whether the documents within the criteria are currently on, or linked to from, OFAC’s website. The Individual document pages for items linked to on, or from OFAC’s website will contain links to the relevant live URL, if one exists, along with the native file housed on our server.

Why do you include items that are not on OFAC’s website on the Research System? Is the regulated community responsible for the contents of those documents?

OFAC’s enforcement history suggests that it imputes knowledge of every statement on its website onto the entirety of the regulated community, even when statements appear specific to a given sanctions program and a given person is looking for guidance pertaining to a different sanctions program that contains provisions similar to those addressed in the program-specific guidance. For this reason, we include virtually everything that is currently on OFAC’s website in the Research System, with the exceptions being rare subsets of items that have no unique bearing on the scope and operation of any active OFAC-administered provision of law.

Items that are not included on OFAC’s website—e.g. statements made in court filings by the agency, interpretive guidance letters issued to private parties and certain guidance that has been removed from the website for reasons other than the interpretations provided being superseded—are presumably not within the broad category of statements of which OFAC would consider the regulated community to have received “fair notice” for the purposes of the “Administrative Procedure Act.” Nevertheless, such statements often serve as invaluable evidence as to the agency’s interpretation of the laws that it administers. These interpretations are potentially subject to change without notice, but as a general matter, OFAC’s interpretation of “staple,” boilerplate legal provision is consistent over time and across programs, with significant changes being notified to the public in some form or fashion.

How should I cite the encyclopedia portion of the Research System?

If I purchase access to a single document, will I still have access to it if I return to the site later?